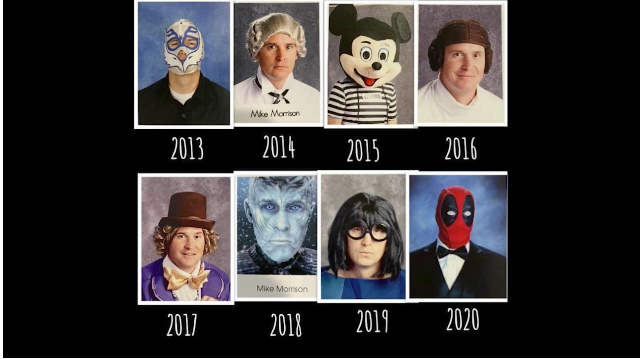 PULASKI COUNTY, Ark. (KARK) — A coach in the Pulaski County Special School District is making his mark in a very special way.

This dedicated P.E. teacher is committed to one certain custom that’s anything but expected. The track and field coach also likes to keep students and staff on their toes.

“They think I’m a little crazy to begin with, but they enjoy it,” said Morrison. “It’s something different, it’s something fun. They know it’s done for them, which they appreciate.”

For the last seven years, Coach Morrison has taken his faculty photo…in style.

Dressing as a Luchadora, a Colonial Man, “Prison” Mickey Mouse, Princess Leia, Willy Wonka, the Night King from Game of Thrones, Edna Mode from the Incredibles and for the 2020 yearbook, Deadpool.

These photos are always a hit.

“Every year the kids come down asking so what are you gonna be this year? And teachers, too,” Morrison said. “And I’m real secretive about it.”

But then the pandemic arrived and the senior class of 2020 took quite the blow. “They lost their seasons, they lost their graduation,” Morrison said. “They got sent home and that was it.

You could tell it took a toll on them. And it broke your heart,” Morrison said.

But then, a bright spot in a dark time, when just recently, the class of 2020 senior photo composite arrived.

And in a year where everything else seems to go wrong, a printing error wedged Coach Morrison right in with the students.

It’ll stay that way on the walls of Robinson High School as a constant reminder of the man behind the masks with a big heart and a message for those 2020 seniors.

“I hope this gives you something to laugh about,” Morrison said.  “In a year, in a spring, that just killed ya, broke your heart, at least you know, from here on out, for the rest of your lives, when you open that yearbook, when you see that picture, you can look at that and say, ‘You know, at least something funny happened during that spring.'”

Coach Morrison said he does already know what costume he’ll wear for this year’s faculty photo.

He hinted it has something to do with everything that has happened this year, but true to his MO, the rest is a secret we’ll all have to wait to find out.