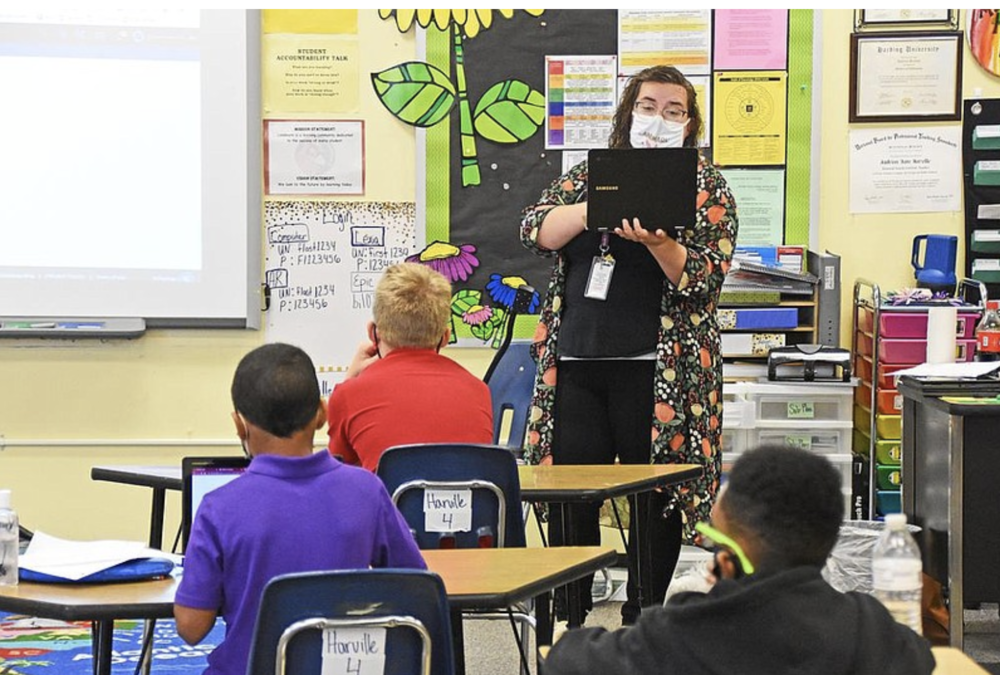 The topic was fitting -- and aspirational -- for a new school year in which teachers, children and the parents of students at Landmark and throughout the state are facing the contagious covid-19 virus and an unprecedented reliance on new technology for in-person and remote, online instruction.

"We count this week as a successful week for K-12 education," Key said.

Pulaski County Special School District Superintendent Charles McNulty said the start of the year has been smooth in his 12,000-student district in regard to students being orderly, wearing masks and taking other precautions to prevent the spread of the covid-19 virus. Buses have run on schedule, he said.

But McNulty and Deputy Superintendent Alesia Smith said there have been some difficulties -- aside from the tropical storm Thursday that prompted tornado drills and the early dismissal of classes.

On one hand, some students who initially opted for full- or part-time online instruction are now asking to return to five days a week of on-campus instruction, McNulty said.

Those calls seeking to switch instruction plans are getting to the point that the district will not be able to ensure physical distancing of students and staff members in the schools, McNulty said.

The district's intent this year is to have schools at no more than 50% capacity to provide that needed space. However, the district is obligated by state directives to provide five days of on-campus instruction to those who want it.

Another "struggle" until the end of the week was with Schoology, which is the online learning management system selected by Pulaski County Special and some other districts for use with all students, McNulty said.

"Schoology wasn't as ready as we needed them to be," he said of the system that he compared to a house because it houses the district's curriculum, search engines and integrates with the state's student management system -- eSchool.

"Schoology and how it works with Google Meets was putting a stress" on the Chromebook laptop computers assigned to each student in the district, he said.

Enhancements to the Google Meets feature of Schoology were slowing the work speed on the devices or booting as many as half of the district's students out of the system.

By Friday, however, the district's instructional technology department had found a fix for the issue, and McNulty was optimistic that the matter was resolved.

As for Landmark's Harville, she said teachers and pupils are adapting to all of the changes in the new school year.

"Anytime we do something, I say, 'I know you normally know how this works but everything is different this year,'" she tells them. "' What you know still applies, but it's just a little bit different.'"

The differences include the combination of what normally would be two fourth-grade classrooms into one space with Harville and Kyra Bell co-teaching a total of 32 students -- some physically present and others who have selected to do virtual instruction at least for part of each week if not all week.

To accomplish that dual instructional approach requires the use of the Chromebook laptops, Schoology and various online resources -- such as apps, prerecorded lessons and videos -- that are loaded into the Schoology platform for student and teacher use.

"Right now we are trying to get everybody comfortable with Schoology and how to do things digitally, and how to operate the Chromebooks," she said. "These students have used a Chromebook one year, but they haven't really used it in several months."

The Pulaski County district has for several years provided each student with an electronic device -- tablets for the youngest students and Chromebooks starting in third grade. This year all grades are using Chromebooks.

"That's different than, 'I know this app. I push it and it turns on,'" Harville said.

Of the 32 children assigned to write -- on their Chromebooks -- the essay on conquering a fear, Harville said she received 12 essays. The others did the writing exercise, but some weren't immediately able to figure out how to submit them, and Harville wasn't physically with all of them to explain the process, "to click this button or that button."

Teachers had about two weeks of training before the start of the school year on topics including how to use Schoology effectively for both online and in-person students, Harville said. That strategizing is continuing as teachers look for ways to teach so that the students don't have to work on computers for hours at a time.

Cradling an open laptop in one arm, Harville displayed for the fourth graders a Schoology web page with its apps and folders on the large screen at the front of the room.

"I figured out last night an easier way," she tells the students about turning in their essays. "Pull out your Chromebooks. We'll do it together," she said, and proceeded to show and tell students to click on "courses" and "language arts" and then "on the one red folder" to get to their document. "There it is," she announces, and she and Bell walk around the room to troubleshoot with the students.

A little later Bell escorts the class to recess while Harville begins to connect to an online meeting with pupils working at home.

In an adjoining classroom building, first grade teacher Erin Blakey is alone in a regular-sized classroom, talking on her computer to an adult who is uncertain that her child, who is playing a safari game, is doing what needs to be done on Schoology.

Blakey suggests reviewing vocabulary words 1-25, but she said she is pleased with the child's status.

"He's got the Schoology and [knows how to use] the tabs, and has all that down; he's awesome," Blakey said. "That's my goal for the week, for them to be able to do that," and she urged the family to take a few minutes' break from the computer.

She then greets another parent and a child. "Hi," she said. "Were you able to get on Schoology?" she asked.

Rachel Stevens, principal at Landmark, said work being done in the early days of the school year is foundational and that higher-level learning is the goal.

"Look for where you want to go -- not just for tomorrow," Stevens said. "What do we want our instruction to look like in four weeks. The ground work we are laying now ... is so we can really focus on instruction then."

Stevens said planning for the school year has been a balancing act of assigning teachers to in-school and online students.

That third option allows students to attend classes in school two days a week and do schoolwork online the remaining three days.

While Harville and Bell at Landmark have a mix of in-person and online fourth graders, the first grade has one teacher -- Blakey -- who teaches online only, while another teacher heads a class of only in-person pupils.

The numbers are shifting, though, Stevens said. As many as 30 Landmark pupils who initially asked for online instruction for at least part of the week, have now asked in the first three days of school to attend in-person full time.